This article was written by Makayla Peacock.

What would make someone leave their prestigious job at one of the biggest tech companies in the world?

For Nabil Ould-Brahim, the answer is happiness.

As one of the most sought after autonomy and automation systems experts in North America, he has worked for numerous high profile technology companies, but he found his home working with Venture Creative Collective alongside his wife Michelle Weger.

After Michelle headhunted Nabil to be on her flag football team, it was clear their synergy was meant for more than just the football field. It wasn’t long before Michelle recruited him to join VCC as a co-owner and Chief Technical Officer. 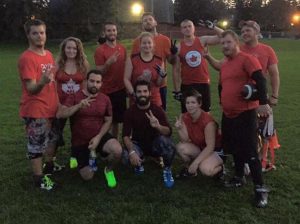 But not only do Michelle and Nabil work and play together, they also live together. When asked how they manage it all, Nabil credits their similar work ethic for their success.

“Working with your wife in a business has its challenges, but it’s also rewarding because if it’s anybody else, you’re two different people who have potentially similar business goals, but different life goals,” he explained. “The reason why Michelle and I are still in business together is that we both have the same personal long-term goals, personal short-term goals, and business goals. It’s like the closest thing to being able to clone myself.”

Switching from the corporate lifestyle to the entrepreneurial hustle

After working for a few businesses that are household names, he decided to make the switch to being an entrepreneur.

If you ask any entrepreneur who was in a similar situation what the best part of making the switch was, chances are they’ll tell you that being their own boss is the best part of their career.

And for Nabil, that is only part of the benefits.

It’s also the idea that there is no limit to how much money you can make, but on the flip side, there is the very real possibility that you won’t make any money.

“The biggest lesson I learned when switching from corporate to an entrepreneur is that it’s scary and freeing at the same time,” he admitted. “You’re on a knife’s edge between scary and freedom.”

Leaving a prestigious tech job that claims to have the happiest employees would be nerve-wracking for anyone, but Nabil quickly adapted to the change and has used his abilities to help entrepreneurs like him grow and scale their business, and for him, it has made the change worth it.

Now instead of working in an environment with little to no collaboration, he spends his days doing what he does best: fixing things and making them better than they were before.

Whether it’s renovations for his and Michelle’s home or creating custom automation sequences and stunning websites that help fellow entrepreneurs, Nabil thrives on making people happy, and that is one of the driving forces behind his success at VCC.

“Here we try to figure out what the entrepreneur’s goals are at the end and we care about the reason why they’re in business and we try to be the people that can help them, guide them, and we try to make their business better,” he said.

Counting the number of families that he’s helped

Unlike a lot of businesses, Venture Creative Collective prides itself on having strong connections with the clients that they help. Each person that works with us isn’t just a client: they’re a person with complex needs and external factors that drive them to succeed, whether it’s families or personal goals.

Nabil makes it a point to get to know those factors, sometimes personally, and he strives to do whatever he can to help make their vision a reality.

“I know I’m helping out another entrepreneur who more than likely has a similar mentality and I have the technical ability to advance their business,” he said. “We usually work with entrepreneurs who care and want to change something in the world and we’re there to be able to accelerate that for them.”

Despite the challenges that come with being his own boss, like struggling to take time off and get adequate rest and relaxation, he’d take that over workplaces that don’t encourage collaboration.

“I get to make other entrepreneurs happy and we count the number of families that we’ve helped. I get to be a big fish in a small pond.”

No matter how deep or how shallow, the pond will be that much better because of Nabil’s passion and commitment to making a difference.

Join us in next week’s edition of the Venture Creative Collective Story where we meet Taylor Holmes: our project manager and content strategist with an interesting outlook on the future of VCC!

Want to see what Nabil’s technical and interpersonal skills can do for your business?